Oh Korea. It is a very strange country. Koreans love dogs, many families here have pet dogs, and my students often talk about how cute dogs are. Yet, many of them still eat man's best friend, though this trend has diminished somewhat in recent years. There are still dog restaurants to be found, but they tend to be more in back street locations. Because of the influx of tourists due to the 2002 World Cup, the government made selling dog meat illegal, and so it is increasingly rare to see, but it exists...Koreans still eat up to 100,000 tons of dog meat a year! The question is, where does all that 'illegal' dog meat come from? Well, an 'illegal' dog meat market, of course.
My previous blog spoke about the colourful Chilseong Market in Daegu. Well, as Leslie and I walked innocently around the market one Sunday afternoon, we happened upon some big cages, each containing three large dogs looking like a cross between orange huskies and Alsations. 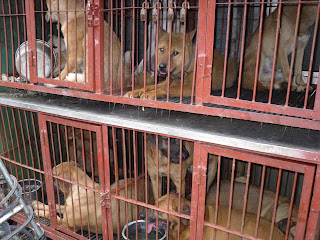 The cages were cramped, not enough room for all three dogs to sit, and they didn't look very healthy. But we naively assumed they were for sale as pets. Leslie has a pet dog back home, and didn't like to see them stuffed in cages like this, so we left the slightly depressing market lane in a hurry. What we saw as we turned the next corner took a few seconds to register, but when we understood what it was we were looking at, it was shocking. 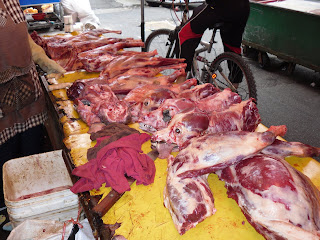 Laid out on a long table in front of us were the skinned carcasses of a dozen dogs. Next to them were also the grim corpses of two smaller dogs, but as yet, not skinned. It was a stomach churning scene, especially as we had no idea that this place was here. Poor Leslie couldn't handle it, and disappeared in seconds. Though I am not a dog lover as such, it was still very shocking to me, but I couldn't help it...I had to take a closer look. With camera in hand, I edged nearer the surreal scene, and under the bemused gaze of the haggard old shop keeper and a couple of amused customers, I snapped away. 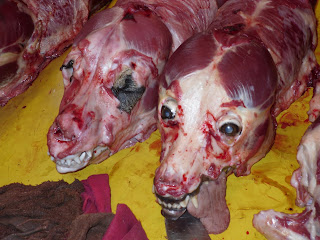 Not only were there complete carcasses, but the usual butcher shop items such as drum sticks, ribs, steaks, and various other cuts of meat. It was very graphic indeed. 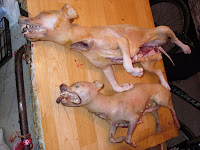 The strangest thing of all was this; sat on another bench, just behind the table of corpses, was the dog meat stall owner's pet dog. Unbelievable. The scene was complete. A stall of caged miserable dogs. A crazy old woman with a glistening machete. A table of butchered dogs. And one cute pet...a dog, of course. 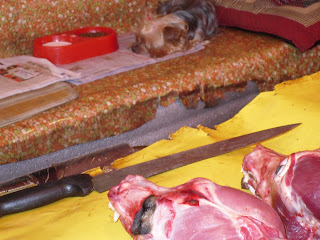 At least I now understood the location of the somewhat mangy and unhealthy caged animals. I am told that dogs are smart. Maybe? If so, then they were either resigned to the same fate as their cousins round the corner, or simply too weak to try and escape. And as for the pet, what was it thinking? "I am the luckiest dog alive?" Or, "Shit, I better behave, maybe it's my turn next?" Whatever the truth, it was a pretty distressing afternoon discovery. 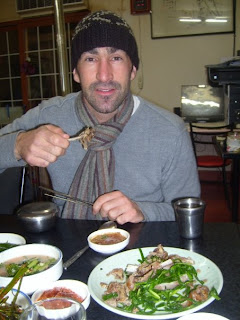 Despite all this, I have eaten dog before. Well, 'When in Rome.' It was a weird experience, and one I'm in no rush to repeat. Rumour had it that the dogs were hung in a tree, alive, and beaten to death with clubs so as to tenderise the meat, but I am informed that this is no longer the case. However, because of the proximity of the caged dogs to the machete wielding ajumma (old lady), I am doubtful that there is any humane killing involved when it comes to the dogs of Chilseong. I am not in any way against people of different countries or cultures eating things that are abhorrent to people elsewhere, after all, alternative traditions is what makes the world go around. However, after witnessing the illegal dog meat market here in Daegu, I am at least sure that, dog lover or not, man's best friend is no longer on my Sunday lunch menu!

Where on Earth is Steven Moore?